HBO is known for creating amazing original content like the Sopranos, Oz, The Wire, and Game of Thrones. But, did you know you can also watch award-winning movies on HBO?

The Best Movies on HBO You Do Not Want to Miss!

People's taste in movies is highly subjective, but to make your entertainment watching easy, we have rounded up the best movies on HBO. When you are wondering what to watch on HBO or selecting a movie to watch with a group of friends, you can choose with confidence.

The 2019 film Joker features Joaquin Phoenix in a role that appears to be tailor-made for this versatile actor. As we witness the main character's descent into madness, we really feel like the actor knows what it is like to slowly lose your mind and grip on reality. True to the Batman genre, the film is darkly comedic with dreamy overtones set amid a backdrop of a cold, heartless city where society abuses the fragile Arthur.

The stage is set and plays out like you would expect, culminating in gruesome violence, yet underneath it all, you feel compassionate towards Arthur and want to jump in and stand up for him. You may not be rooting for him, but the film portrays him as somewhat of a hero. Audiences loved the movie, and it earned 8.5 out of 10 stars on IMDB and won two Oscars, including Best Performance by an Actor in a Leading Role which went to Joaquin Phoenix. This crime/drama/thriller is a must-see.

Another one of the good movies on HBO to watch right now is Long Shot. It's a romantic comedy starring Charlize Theron and Seth Rogan. Theron plays a straight-laced Secretary of State who is running for president, and Rogan is her childhood friend, and they reunite at a party. She hires him to write some speeches for her, and predictably sparks fly.

Critics panned Rogan's performance pretty harshly as though he was phoning it in, but the overall effect of two opposites thrown together in this political setting works. Viewers gave it 6.8 out of 10 stars on IMDB. There are some really funny scenes and some situational humor, but the movie is enjoyable because of the quality actors. June Diane Raphael and Bob Odenkirk play key roles and make it even more enjoyable to watch. The film won five minor awards and was nominated for nine others.

One of the best movies on HBO right now or anytime for that matter is Temple Grandin. Starring Claire Danes, Temple Grandin is a biography/drama that showcases this extraordinary woman's life. Temple Grandin is autistic, but the movie uses a fascinating method of illustrating how her mind works and how she processes information. The real-life Temple Grandin is a well-renowned scientist in the humane livestock handling industry.

The film is so real it's almost painful at times to watch as Grandin struggles to fit in and find peace in this noisy, distracting, confusing world. The movie came out in 2010, and audiences adored it; it has 8.3 stars out of 10 on IMDB. The film won one Golden Globe award and 33 others. It was also nominated for 36 other prizes.

Ford v. Ferrari is one of the best new movies on HBO and a must-see in our book. The story that unfolds stars Matt Damon and Christian Bale. Damon plays American car designer Carroll Shelby, and Bale is race car driver Ken Miles (a simple man with a simple life). The film gains traction as both men team up to overcome corporate bureaucracy to design and race the fastest car against Ferrari in the 24 Hours of Le Mans competition in 1966.

Among the exciting driving scenes and tense back-and-forth with corporate suits, the two men stumble towards an unlikely friendship, which changes them both forever. Both men put on stellar performances in this gripping action/drama biography. There are sweet moments interspersed with scenes of high energy and excitement. This one is a thrill ride for sure. The movie won two Oscars, 21 minor awards, and was nominated for 78 others. It earned 8.1 out of 10 stars on IMDB.

Richard Jewell is one of the best movies to watch on HBO this year. It came out in 2019, and fans of true crime will not be disappointed. The biographical drama centers on security guard Richard Jewell who stopped a bomb attack at the 1996 Atlanta Olympics. At first, Jewell is considered a hero, but when the FBI and media leak information that Jewell is a suspect in the bombing, his life unravels.

The story is skillfully told through gripping dialogue and graphically moving scenes. Starring Paul Walter Hauser, Sam Rockwell, Jon Hamm, and Clint Eastwood, Richard Jewell is a cautionary tale of what can happen when the media gets ahold of a storyline and refuses to let go, regardless of the truth. The film was nominated for 1 Oscar and earned 7.5 out of 10 stars on IMDB.

Anyone who loved The Shining (1980) will consider the follow-up, Doctor Sleep, one of the top movies to watch on HBO. You may remember the little boy in the movie Dan Torrence. In Doctor Sleep, he is now a tormented grown-up, expertly played by Ewan McGregor. Although he has made somewhat of peace with the events of his childhood, he returns to the "scene of the crime" to save a young girl with powers like his own from a cult called The Knot.

The mystery moves along quickly and keeps your attention, and the ending is satisfying yet also surprising. Doctor Sleep earned 7.3 out of 10 stars on IMDB and won seven awards with another 27 nominations. Stephen King wrote the book and screenplay.

Queen and Slim is a high-tense drama about a first date that goes horribly wrong. A black couple is pulled over for a routine traffic infraction in Ohio, and suddenly the man is forced to defend himself, killing the white officer and altering the trajectory of both their lives. The couple is forced to go on the run but find out that someone videoed the entire thing.

The film patiently tackles the themes of racism, terror, and victimization. As the two fight for their lives, they become closer and forge an unbreakable bond. The film won 11 awards and received 31 more nominations. It also earned 7.1 out of 10 stars on IMDB).

The 2020 adaptation of the film The Invisible Man is another one of the great movies on HBO. However, this version is quite a bit darker than the original. Hailed a drama/horror/mystery, it stars Elisabeth Moss (Madmen), who is haunted by her abusive ex who commits suicide. As the action heats up, Moss adeptly plays a woman who fears she is losing her mind while also trying to convince everyone around her that what she is experiencing is real.

The movie has none of the cute, cartoonish silliness of the original but plenty of the dark themes of the Kevin Bacon version and is genuinely scary at times. However, this film feels fresh with a new take on a familiar but engrossing theme. It earned 7.1 stars out of 10 on IMDB and won 2 awards but was nominated for two more.

Anyone hooked on politics, especially in our current climate, will enjoy a brief reprieve by delving deeply into the last year of Barack Obama's presidency. The documentary “The Final Year” came out in 2017 and follows Obama's foreign policy, focuses on his close administration team, and how the year unfolded.

The video is a documentary with plenty of audio and video clips along with commentary. The film earned one award nomination and has 6.4 out of 10 stars on IMDB.

If you are a documentary junkie, you will love Jim: The James Foley Story. The war biography details the life of journalist James Foley who was captured and killed by ISIS in 2014.

The movie came out in 2016 and stars James Foley (in video clips), Unai Aranzadi, Zac Baillie, and Manu Brabo. The crew also interviews another hostage Merritt Matthew Chase to talk about his experience along with Jim. The film has 7.7 stars out of 10 on IMDB.

Although Alien originally came out in 1979, it remains a cult favorite among sci-fi and horror enthusiasts. The movie features a young Sigourney Weaver, Tom Skerritt, and John Hurt. The excitement begins right off when a space vessel responds to a distress signal from another ship. After an inspection of the ship, one of their people is infected by what eventually turns out to be an alien life form. As the crew is dispensed with by the rapidly growing alien, Ripley (Sigourney Weaver) fights for her life.

The special effects are stunning considering the time frame, and even after watching it multiple times, it remains a favorite. Alien has 8.4 stars out of 10 on IMDB and won one Oscar and 16 other awards.

Another sci-fi thriller you won't want to miss is Lucy in the Sky, which stars powerhouse actress Natalie Portman, Jon Hamm, and Zazie Beetz. The actors’ performances are admirable and make the film very enjoyable.

The story is about a female astronaut Lucy (Portman), who experiences something profound while out in space and returns home to a fractured reality and starts to act irrationally. Suddenly, her small-town life doesn't seem to be enough for her anymore. Sci-fi buffs will love this one as it is also set within a backdrop of rural America when life was simpler, and the space race a much larger target. Lucy in Sky earned only 4.8 stars out of 10 on IMDB but was nominated for three awards.

Another oldie (1988) but goodie is A Fish Called Wanda. This timeless film features Jamie Lee Curtis, Kevin Cline, and John Cleese. It's an enjoyable romp with a goofy gang of jewel thieves run by Curtis.

The movie is funny throughout but also heartwarming. Cline shines as the dimwitted thug. The film remains at 7.5 out of 10 stars on IMDB even after all these years. It won one Oscar, eight other awards, and was nominated for 18 other prizes.

The film's lofty goals feel unreachable, and the story drags at times, but it is an enjoyable watch if you love sci-fi space films. It's hailed as an adventure/drama/mystery but in our book really falls into the sci-fi category. Ad Astra has 6.5 out of 10 stars on IMDB and was nominated for one Oscar.

Jojo Rabbit is another available title on HBO about a young, lonely, German boy who finds out his mother is hiding a Jewish girl in their attic. At times, the film is funny, sometimes serious, takes on the theme of anti-Semitic hate and shifting perceptions as the boy who is loyal to his country begins to have doubts.

The film may not be for everyone, but this war/comedy/drama is well written and well-acted. It won one Oscar, 33 other awards, and was nominated for 157 different prizes. It has 7.9 out of 10 stars on IMDB.

This time has come! We're glad to take our attention away from the events of 2020 and deep dive into the atmosphere of fairy-tale holidays. To sweeten your days and 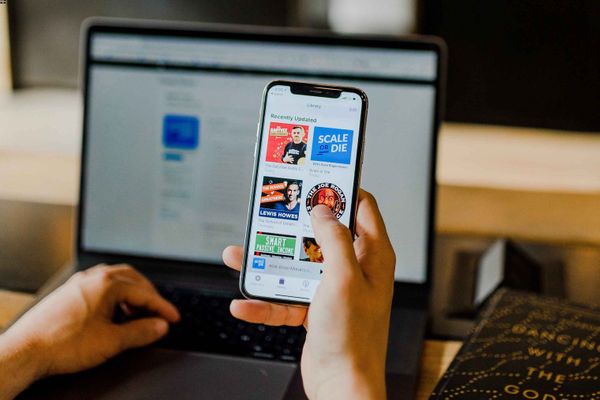 Discover the best podcast apps for downloading and managing your shows. Compare the contenders and check for the most useful features.